so, what have you been up to today?

Me? just playing in my studio!!

First I made this: 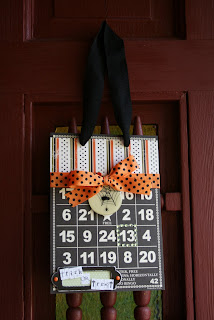 Used a Jenni Bowlin bingo card. some Walmart ribbon, some Making Memories paper and button (from last years release), sticker letters and that little bit of green with white dots is packaging from a set of MM stamps. Oh, and a Heidi Swap book plate and bling, too. 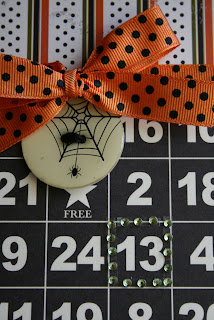 And will someone who know Jenni Bowlin tell her that I absolutely LOVE her bingo cards - the new ones (like the one above and the tiny ones) are just so fun. BUT how cute would it have been if there was a 31 on this one particular card? Adorable!! But since 13 is unlucky and this was a Halloween thing - it worked. BUT 31 - would have been better. Anyway.............

Then I made this: 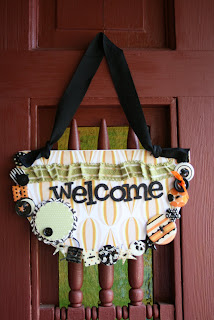 Used a piece of Basic Grey paper here - it's from their new lines that I hope will be arriving at Scrap Etc. soon!! And tons of buttons - Making Memories buttons from last year (obviously I didn't much with them last year since I have so many), used my scallop punch on some Jenni Bowlin paper and more of that MM packaging. Oh, and a few Creative Cafe buttons and Thickers - which a love!! And the cute ribbon was in my second Scripts Kit. 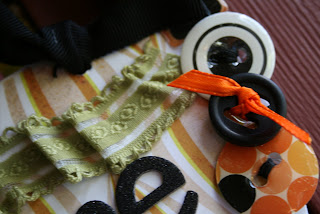 And these guys are watching Toy Story 2, disc 2 - which has all the behind the scenes stuff. 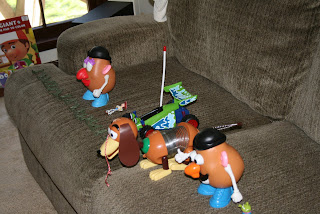 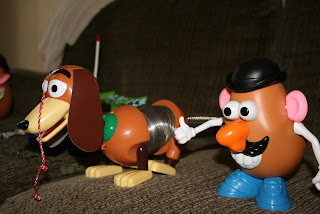 oh - Cole is watching, too! He's in control of the remote. I really think Cole only has a few options as far as his career choices when he grows up. One - he can be a DJ - just because he know all these little tidbits of information and can introduce the songs just right - he does this all the time................1, 2, 3 - hit it - he's even figured out the timing so he doesn't talk over the music. His second choice could be a tour guide somewhere - anywhere that interests him. McDonald's would be a good one, or DisneyWorld, of course. He'd probably love to guide people around Toys R Us honestly. And thirdly - hmm, maybe a narrator for Pixar films. It's so funny how he can watch something and memorize the words, the tone and the humor behind it. Not just the words - but exactly how to deliver it!!! It's so funny. He also remembers slogans from commercials too - like Walmart's - Save Money. Live Better. He'll point out things in the grocery store - like Resolve Carpet Cleaner - and give me the slogan. He is quite entertaining!!

Well, I'm going to empty the dishwasher. We decided to try the evening service at Church - so we'll be getting ready for that soon. We're starting a new series that is supposed to be wonderful. It's called At The Movies - and - they are serving popcorn tonight at church!!! Crazy fun, huh?? :)

I'm glad you guys are going tonight...Jer said it was really set up cool. Can't wait.

Those are cute hangings, Lisa. And your orange polka dot bow is tied perfectly! Will you show me how to tie a great bow?

And could you just squeal with the adorableness of Cole and the Toy Story people hanging out watching the movie? Oh man, that is adorable.