A little tutorial for you - framing a frame

I've had this project on my 'to-do' list for quite some time. Mentioned it to Carol the other day and just decided it was going to happen this week. So, I gathered my supplies and got to work. 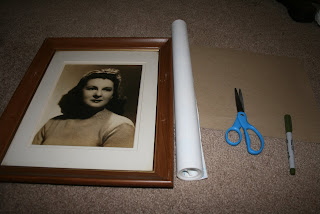 I bought a large roll of contact paper, it's probably 18 inches wide. The photos I'm framing are pretty big, maybe 10x13. If you are framing something smaller, see my notes at the end.

First I grabbed my framed photo and my chipboard. I placed my chipboard behind the frame on the floor and sort of just sketched out where I thought my outer frame should go. When placing my chipboard and sketching my lines, I made sure to sketch it where the chipboard pattern I was creating would cover more than one fourth of the frame. You can see this here: 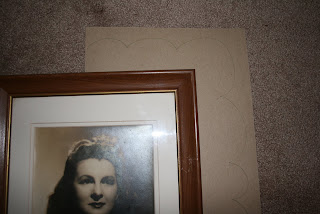 You can barely see the line I drew - but it's there.

Now, cut out your cardboard pattern and trace it onto the back on the contact paper. 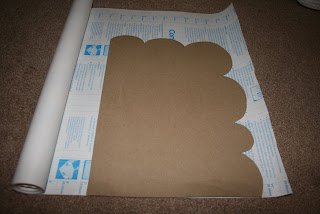 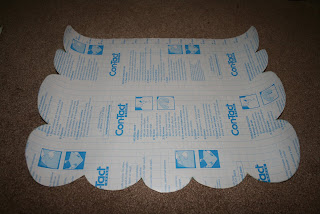 Now you want to trace the first half unto the back of the contact paper again. Now I took both of my two pieces of contact paper and laid them on top of each other, face up. I overlapped the scallops where the two pieces meet. I only did this because in my original attempt at this project, I ended up with this: 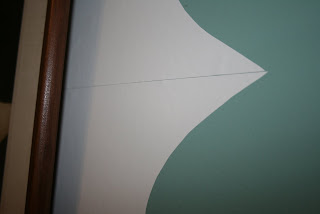 The two pieces just met and there's a thin line between the two. This isn't a huge deal, so I thought I'd try the overlapping to see if that looks better. 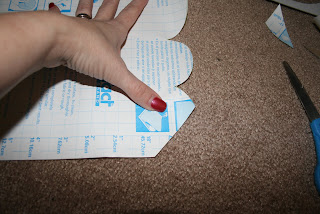 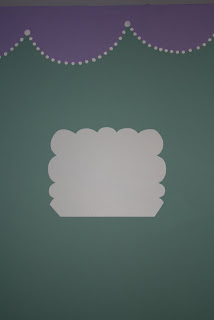 That's my first piece - I stepped back to make sure it was even. Sure, a level would help, but you know, that's not how I roll. Here's the completed pieces of vinyl on the wall. You can see where they overlap in the middle. 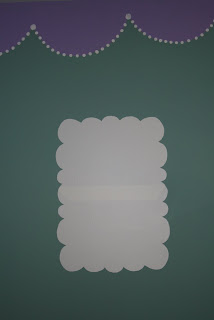 Now here are the two completed ones, with the pictures hanging up: 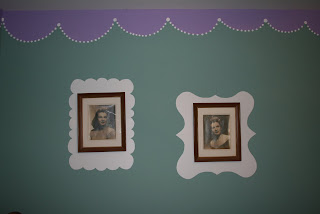 I really like the one on the right more than the one on the left. I may take it down and try again. I like the scallops, but think I should have made it more even all the way around - so the vinyl on the sides was as wide as the vinyl at the top. All in all, I'm happy for now and really glad to mark this off my to-do list!!

Contact paper versus vinyl - my thoughts: the contact paper is thinner than vinyl, as well as cheaper. Since I'm not the best at sticking things on the wall, I thought contact paper would be better since it's easily removable and I could reposition it (or take it off if it didn't work out). Most vinyl rolls I've seen aren't 18 inches wide - so I would have had to use a lot for this project, which really means, I wouldn't have done it at all. In the end, I'm happy with the contact paper and wouldn't trade it for vinyl. I like the way it looks just fine!

Cardboard notes: you can use chipboard or packaging from a cereal box, or even poster board. I just used what I had on hand. My piece was pretty big (luckily) since what I was framing was pretty large (i think 10x13). If you are framing something smaller, I would try to make a pattern right on the contact paper backing. Especially if you are going for a more free look. I wanted my frame to be symmetrical, so I didn't try it any other way.