I seriously have had about a gajillion things running through my mind that I have wanted to blog about. Sadly, none of those things have made it out of my mind and through my keyboard to you. So I'm attempting to work on that this week - getting some things out of my head, making room for more things! 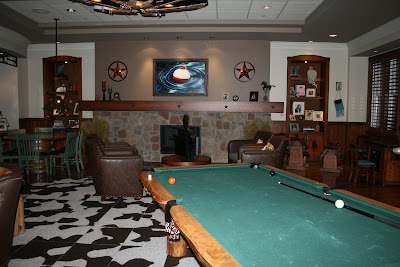 This particular room is awesome! Tons of western stuff, a cool pool table, gaming systems, big tv's, and tons of memorabilia from Brad and his wife. Very Cool!! Cole loved it - he absolutely loves Brad Paisley!!

One of the things I wanted to share here has become a bigger deal to me since all this stuff with Tiger Woods. First - I don't know what he really did, and don't care - it's sad for his family, but that's as far as my opinion goes. Second - my point - celebrities do so many good things - they give of their time and their money and their love to so many different places and people and NONE of that is ever in the spotlight. NEVER!! I mean, the Tiger Woods room at the Target House is really nice - I'm not sure how much time he put in himself to decorating it - but hey, it's there because of him. But, no one knows that if they haven't been there, playing a board game in the Tiger Woods Library! Why isn't that important enough to make the news? Why do magazines and online sites and news programs always choose to tell the bad stuff? The stuff that would never make the news if it were just some John Doe or Jane Doe, who had been cheating on their spouse. Anyway - I wish there was a different way things like that were handled. Why do celebrities not want it known that they do good things - things that aren't about politics, at least. I know a family that had a personal visit from J.J. Yeley and Faith Hill. When J.J. Yeley visited them, the newspaper did a write up and it was posted for all to read. That's a good thing!! I don't think it's about showing celebrities doing good things, just to get publicity. I think people just need to see good positive examples. I mean, we don't get tons of positive examples from celebrities - so why not point out those good things, so we'll see something positive. What if some young girl sees some famous female star spending time with sick kids and suddenly instead of thinking she's not skinny enough, or pretty enough, she's thinking she could do something to help - she could make a difference. I don't think that's a bad thing at all!!

And I also wanted to talk about the whole Thanks and Giving campaign that St. Jude does during the Holiday season - but it's a bit too late to tell you where to shop to help St. Jude, since the season is over. But, here's something you can do - go visit www.stjude.org and click on the shop button. They have some really really cute things in their gift shop! They have tons of seasonal items - Valentine's is right around the corner and they'll have some cute stuff!! Their Christmas and Halloween is clearanced now - so go check it out! It's hard this time of year to just give money to a charitable organization. We're all just getting over Christmas, and besides, our economy stinks. But, if you have to buy a gift anyway - why not buy somewhere where the money helps someone - helps kids, helps my kid.

So - those were my St. Jude thoughts!! I'm not sure what took me so long to actually post it. But better late than never. Now - click that link up there - and check this out: 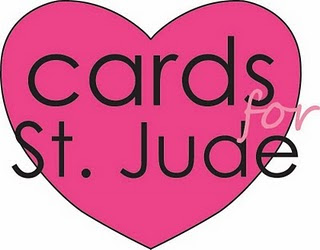 I'll be working on some cards this week and hopefully getting them in the mail really fast! I hope you'll do the same!! Thanks for reading and hanging in there through all this babble!!