Wow, I'm not a good blogger at all.  I've had the hardest time making this a priority.  But, I'm trying to do better - so here's hoping I won't go a month again without blogging.
We just got back from a trip to Disney.  It was wonderfull!!  Of course, I'm not sure how anyone could go to Disney without have a wonderful time.  We left super early last Thursday and made it there by late afternoon.  We unloaded and settled in. We decided to head to Epcot that evening for a little while.  We did Magic Kingdom and Hollywood Studios, too.  We skipped Animal Kingdom this time so we could go to Universal Studios.
We did all our favorites, tried some new places to eat, rode our favorite rides and Cole tried a few new things, too! He rode the Haunted Mansion with us (hated it), Mission Space with his dad, and a ton of things at Universal! I think the best part for me was watching the Block Party Bash and seeing Cole dance in the street with Mr. Potato Head!!  We also watched the Move It, Shake It, Celebrate It street party.  Cole did some dancing again with Jessie from Toy Story.  It was wonderful to see him more outgoing and willing to take part in things that he used to just stand back and watch. 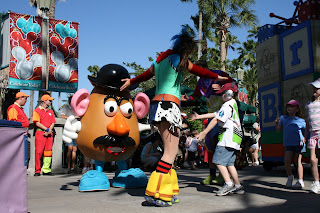 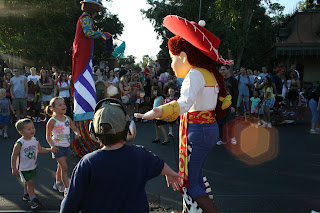 And we got to see Lotso Huggin' Bear from Toy Story 3.  Cole was super excited to see him.  I'm not sure he was excited to see us though.  Jason joked around with him and told him he didn't want to be in the picture with a bad guy.  Lotso took Jason by the arm and walked him over to the corner!  Lotso put Jason in time out!! 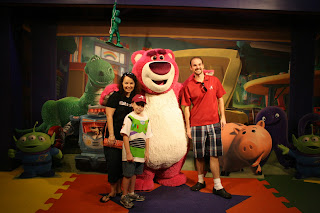 We also saw these guys - we've never seen them before, so that was a nice surprise! 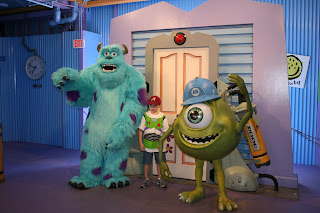 While at Epcot, we got to see this guy - the new character, Duffy, the Disney Bear: 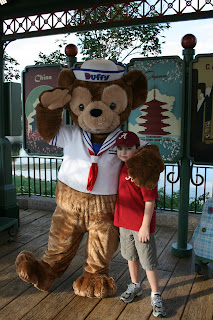 I have tons of pictures, of course, and really you don't want to see them all - but here are two of my faves: 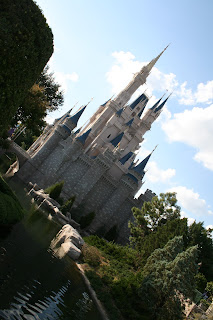 This is my favorite castle shot, I think.  It actually matches the painting of the castle my aunt did! 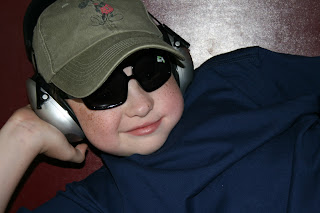 And he's just so cute!!
I'll be back with more once I get them all uploaded and find the good ones!!
And I've got pictures from Hogwarts and let me tell you - the whole
Wizarding World of Harry Potter
was
FANTASTIC!!
ok - off to unpack more!
later!!